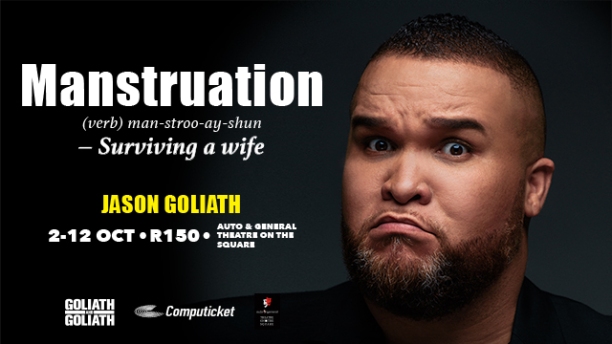 I attended the media launch of Jason Goliath’s new one-man show, called “MANSTRUATION: Surviving a Wife” on 1 October. The show is on from 2 to 12 October 2019 at the Auto and General Theatre on The Square at Sandton City, Johannesburg.

Jason is one of the very few comedians fondly known for getting away with making audiences laugh at life’s uncomfortable truths. Now having married the love of his life, audiences can prepare themselves for brutally honest and uncomfortable truths around relationships and a whole lot of laughter!

MANSTRUATION is a perfect night out. Whether you are in a short-term or long-term relationship, engaged, married, divorced or single, the show is a must see. Not only does he talk about what he has learned as a married man of 8 months, Jason also weaves in little nuggets of knowledge that he has picked up from strangers at car washes, about the sanctity of marriage.

Jason promises that his show it is not a story about the battle of the sexes. The very construct of the show is unbiased as it makes light of either side in the Jason Goliath way – hilarious and thought provoking. His authenticity and energetic personality will win you over and more than likely, leave you gaping at a thought, then immediately breaking into raucous laughter.

What should audiences expect? I thought the show was 90 minutes of humourous advice about how to love and treat your partner. It started out with a fair amount of toilet humour but quickly picks up to the more “serious” side of things when Jason starts to talk about marriage and the beauty of relationships.

“After leaving my show, I want people to better understand their situation and start thinking about what they want and where they are going. I want people in amazing relationships to “get out of their own way”. More often we take things too seriously, we have become too sensitive, we over-analyse and have become so selfish. My show offers a deeper understanding and a solution in the way I know best – being funny”.