A nightclub singer, a double-murderess, a smooth-talking lawyer and a cell block of sin surrounded by the razzle dazzle of the world’s sexiest musical soon returns to the stage in Cape Town and Johannesburg! You’ve got it comin’ as the story of the award-winning Broadway and West End musical CHICAGO unfolds to show-stopping songs including ‘All that Jazz’, ‘Cell Block Tango’ and ‘Mister Cellophane’.

The multi-talented all-South African touring cast, band and crew began rehearsals in Johannesburg in August 2018  ahead of an international year-long tour that began in New Zealand.  First stop was Auckland, followed by Wellington where audiences were dazzled and critics raved. “Corruption, greed and murder comes to the capital courtesy of world class CHICAGO” says StuffNZ while Diversions summed up the show: “A killer chorus, exceptional choreography, razzle, dazzle and all that jazz”  are just two of many glowing reviews.  In October the show moved to China, opening at the Grand Theatre in Chongqing. Three more engagements followed in October before opening in Beijing in November; Guangzhou in December and Shanghai in December 2018 and January 2019.

The company returned to South Africa in January 2019, ahead of the South African leg of the tour in association with BBC First.  CHICAGO will be at Artscape, Cape Town from 15 March until 14 April 2019, thereafter heading to Montecasino’s Teatro in Johannesburg from 20 April to 26 May 2019. Booking is open at Computicket.  After the South African season, the SA International company will be touring Europe. Long may the standing ovations continue across continents  as these musical ambassadors continue to proudly fly the South African flag high.

From the opening line to curtain close – there’s nothing like CHICAGO on stage. Originally staged in Cape Town and Johannesburg in 2005 and again, owing to popular demand, in 2008 at Montecasino’s Teatro and Artscape, this show has been enjoyed by more than 210,000 theatre-goers.  Reviewers and critics alike raved about the show.  “This Musical is Hot with a capital H. It’s so sexy that it sets temperatures soaring – even on a chilly night!” said The Citizen while The Tonight called the show “A class act all the way …. CHICAGO is impeccable, irresistible, unmissable” and Artslink simply summed up the show “A hot, hot ticket.” 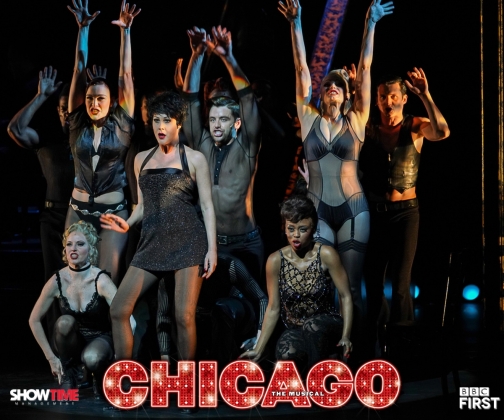 Produced by Showtime Management in association with Barry & Fran Weissler and David Ian, CHICAGO has a combined South African and international creative team including Associate Director, Tânia Nardini and Re-creation of New York Production Choreography by Gary Chryst, both of whom have staged CHICAGO across multiple continents. Award-winning Musical Director, Bryan Schimmel (Jersey Boys, Annie, Priscilla Queen of the Desert) leads the 11-piece orchestra and the sexy, stylish ensemble will once again razzle-dazzle South African audiences.  This great musical is simply … Broadway at its best.

“We are delighted to have most of the original company for our return, and I believe the tremendous talents of each and every member in the company will take this all-South African production to even greater heights in 2019.” says Hazel Feldman, CHICAGO’s SA Producer. “From its unique choreography in the style of Bob Fosse to its sizzling score and intriguing plot performed by some of this country’s most talented performers makes it one show not to be missed.”

Winner of six Tonys, two Oliviers, one Grammy, two Baftas and six Academy Awards, CHICAGO is the longest-running musical revival in Broadway history and truly is “The sharpest, slickest show on the block” (The Times, UK).

CHICAGO has everything that makes Broadway and the West End great – a universal tale of fame, fortune and all that jazz; one show-stopping song after another, including Razzle Dazzle; the sexiest, most sensational dancing and a sharply sophisticated set which incorporates the live orchestra.

It’s no surprise that this devilishly delicious musical has brought cheering audiences to their feet all around the world, from Australia to Argentina, from Spain to South Africa. An estimated 31 million people have seen CHICAGO, which has played over 32,500 performances worldwide.

CHICAGO was first created by the legendary Broadway trio of John Kander (music), Fred Ebb (book/lyrics) and Bob Fosse (co-author, original director and choreographer) in 1975, and was based on a 1926 Broadway play written by Maurine Dallas Watkins, a journalist from the Chicago Tribune who had covered the sensational trials of two women, both of whom were accused of killing their lovers whilst under the influence of drink and jazz.

Kander and Ebb enjoyed a collaboration that spanned four decades, defined musical theatre on Broadway and earned them numerous awards.  Bob Fosse was one of Broadway’s biggest and brightest creative stars, renowned for his innovative and spectacular staging, with the emphasis on exhilarating dance sequences.  He turned out one hit after another from the 1950s to the late 70s and is the only director so far to have won an Oscar, two Tony Awards and an Emmy Award in the same year, 1973.

CHICAGO continues to be one of the most successful international musical hits of all time. CHICAGO’s international appeal stems from its enticing tale of murder, greed, corruption, violence, exploitation, adultery and treachery-characteristics the entire world is drawn to.  “I know a WHOOPEE  spot …..”

Computicket is the official ticketing partner for the Chicago The Musical, and tickets should not be purchased from any other supplier/outlets.

Here’s a short trailer of Chicago.

20% Discount on groups of 20 and more – Tuesdays, Wednesdays, Thursday

and Sunday 6pm performances only valid for the top two prices.

One thought on “Chicago The Musical”

Cadbury Dairy Milk have launched their new Valentines Limited Edition range and I was happy to receive this beautiful press drop, just in time for #ValentinesDay. The unique design of this special slab of chocolate is that it has a "pop out" section in the middle in the shape of a heart. Awww, how sweet (pun intended!) Available in Original and Dream. Thank you @cadbury_sa Get all the details here: http://bit.ly/2OreyZG #ShareYourHeart #GlassAndAHalf #PressDropAlert #PressDrop #MishkahOnTheMove #mzansilifeandstyle